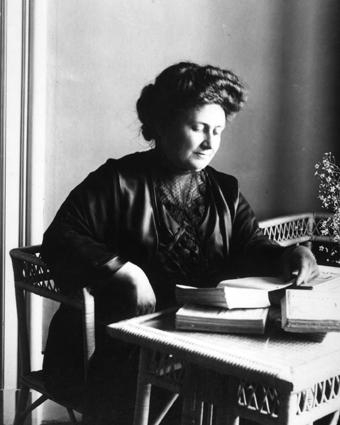 Who was Dr. Maria Montessori?  How did she develop the Montessori Method?

Dr. Maria Montessori (August 31, 1870 - May 6, 1952) was a physician, educator, humanitarian, and leader for social reform. Through providing materials in the children’s environment, then observing their interactions with them, she discovered children’s intrinsic drive to learn.  She realized that if an environment provided activities aimed to encourage their in-born, spontaneous development, children had the innate aptitude and urge to educate themselves.  Dr. Montessori had discovered the natural human ability to auto-educate in a prepared environment. And with the Montessori Method, she created the world’s only scientifically designed educational pedagogy.

Born in Italy on August 31, 1870, Maria Montessori was an intelligent, ambitious female in a male-dominated society. Although her parents urged her to become a teacher—one of the few acceptable careers for a woman at that time—Montessori attended a technical school, and  determined she was destined to become a physician.

Despite resistance from her father, and initial rejections from the head of the medical school, Montessori doggedly pursued her dream. In 1890 she began her studies at the University of Rome.

Discrimination against her gender did not deter her passion and hard work.  It was a difficult path to choose, but on July 10, 1896 Dr. Maria Montessori became the first female physician in Italy.  Upon her graduation she began working at the university hospital.  Her research there led her to making professional visits to an asylum for the insane and developmentally disabled. It was during these visits that Dr. Montessori made an observation that changed the course of her career from medicine to education.

One day, a disgusted caretaker described to Dr. Montessori the “uneducable” children housed there, scrabbling about on the floor picking at crumbs after each meal.  These disabled children were kept in rooms that were bare, devoid of furnishings.  Dr. Montessori recognized that the sparseness of the environment, which provided no sensorial stimulation and nothing to manipulate with their hands, was contributing to their developmental delays.

By 1898 her controversial views were receiving national attention. Working with special needs children in her care, Montessori put her own educational theories into practice, and those children achieved state exam scores as high or higher than the public school children. But rather than claim her methods a success for children with disabilities, Montessori began to question the validity of traditional educational methods for “normal” children.

In 1906 she gave up her work with the developmentally disabled to create a school for typically-developing children living in the slums of Rome.  In January 1907, she opened “Casa dei Bambini”—or “Children’s Home”—and began her life’s work:  the development of The Montessori Method.

Through providing materials in the children’s environment, then observing their interactions with them, she discovered the intrinsic drive of children to learn.  She realized that if an environment provided activities aimed to encourage their in-born, spontaneous development, children had the innate aptitude and urge to educate themselves.  Montessori had scientifically discovered the natural human ability to auto-educate in a prepared environment.

Her students made extraordinary progress, and word spread throughout Europe of Montessori’s new approach.  More schools were opened, and Switzerland used the Method in their national kindergartens, which began at age 3.  Dr. Montessori began training teachers—or guides—and published her first book, The Montessori Method, which was translated into 20 languages.

As news of her success spread, Dr. Montessori devoted her time to public speaking engagements throughout the United States, Europe, and the United Kingdom. As the world careened into its second World War, Dr. Montessori’s view of education as social reform fully emerged through her lectures and writing on the natural development of social consciousness in children.

Dr. Montessori’s theory of social reform through education would continue to develop and evolve throughout the remainder of her life.  She established the Association Montessori Internationale with her son to carry on her works.  She formed teacher training centers throughout India and the Netherlands, and was nominated three times for the Nobel Peace Prize.

Today there are over 20,000 Montessori schools in the world—over 4,000 of them in the United States alone—making Montessori education the world’s largest single pedagogy.