Most forms of education have produced famous graduates, but most of these graduates are in a certain fields.  Famous Montessori graduates appear in all fields—the arts, computer engineering, literature, science, politics, etc.  This is because Montessori education does exactly what it sets out to do:  it allows each child to reach their fullest potential, no matter what that potential is in, rather than forcing the child into a mold.

Sergey Brin and Larry Page – Co-Founders of Google.  “You can’t understand Google,” says Wired, “ unless you know [its founders] were Montessori kids . . . in a Montessori school, you paint because you have something to express or you just want to . . . not because the teacher said so.  This is baked into Larry and Sergey . . . it’s how their brains were programmed early on.” When Barbara Walters asked Brin and Page if the fact that their parents were college professors was a factor behind their success, they said no, that it was their going to a Montessori school where they learned to be self-directed and self-starters. They said that Montessori education allowed them to learn to think for themselves and gave them freedom to pursue their own interests.

Will Wright – Video game developer, creator of the Sims, Sim City and Spore
“Montessori taught me the joy of discovery. It showed you can become interested in pretty complex theories, like Pythagorean theory, say, by playing with blocks. It’s all about learning on your terms, rather than a teacher explaining stuff to you. SimCity comes right out of Montessori.”

Jimmy Wales - Co-founder of Wikipedia.  As a child, Wales was an avid reader with an acute intellectual curiosity.  This he credits to the influence of the Montessori Method on the school’s philosophy of education. According to him he “spent lots of hours pouring over the Britannicas and World Book Encyclopedias.”

Anne Frank – Memoirist & author. Diary of a Young Girl has been translated into 67 languages and is one of the most popular books in the world today.

Gabriel Garcia Marquez – Nobel prize-winning author
“I do not believe there is a method better than Montessori for making children sensitive to the beauties of the world and awakening their curiosity regarding the secrets of life.”

Katharine Graham - Pulitzer prize-winning author and former owner/editor of the Washington Post.  owner/editor of the Washington Post attended a Montessori pre-school where the newspaper owner first learned to read and write, instilling a love of the written word that would stay with her her whole life. "The Montessori Method- learning by doing-once again became my stock in trade..." from Personal History by Katharine Graham.

Taylor Swift – Grammy Award-winning singer/songwriter.  Swift is country music’s youngest-ever Entertainer of the Year, attended Alvernia Montessori School in Berks County PA.  The singer is widely described as “the product of homegrown values.” The New York Times says she is “. . . more in touch with her inner life than most adults.”

Beyonce – Singer, songwriter, actress and fashion designer, 16-time Grammy award-winner.  Beyonce has been nominated for more Grammys than anyone in history and is one of pop music’s most highly-regarded figures.

Sean “P Diddy” Combs - Grammy award-winning musician, and entrepreneur.  The multi-talented artist Sean Combs says he feels fortunate to have attended Mount Vernon Montessori School during his childhood, recalling that, “I feel like I was nurtured into wanting to be somebody special”

Joshua Bell - Grammy award-winning violinist.  As a world-renowned violinist, Bell is thoughtful about the role his music plays in society.  In a cultural experiment turned Pulitzer Prize-winning Washington Post story, it is Bell’s humility that most inspires.  In suspending his fame to explore the true meaning of his work, Bell exhibits Motnessori thinking at its best.

Chelsea Clinton - Adjunct Assistant Professor at Columbia University’s Mailman School of Public Health, and board member of the Clinton Foundation and Clinton Global Initiative.  She is the daughter of former president Bill Clinton and former secretary of state Hillary Clinton. She studied at Stanford and obtained her Masters of Philosophy at Oxford, and a Masters of Public Health at Columbia University.

Dr. Devi Sridhar - Youngest-ever American Rhodes scholar, Oxford lecturer on global health politics.  At 18, Devi Sridhar spoke five languages, played both tennis and the violin expertly, and co-wrote a book on Indian mythology.  In 2002 she became the youngest Rhodes Scholar in the program’s 100-year history.  Interested in health as a young person, she has been the director of the global health governance project of the Global Economic Governance Programme at Oxford since 2006.

David Blaine - Illusionist & magician. David was a four-year-old Montessori student when he fell in love with magic. Today he’s called “the modern day Houdini” by The New York Times, which says, “He’s taken a craft that’s been around for hundreds of years and done something unique and fresh with it.”

Julia Child – Celebrity chef & author. She credits a Montessori background with her manual dexterity—a key feature of her mastery as a chef—and with the love and joy she found in her work.

Helen Hunt – Academy award-winning actress (Oscar, Emmy, and Golden Globe all one year) “If there’s a message, it’s that the unlovable and unattractive parts of ourselves should be embraced. The only real currency between people is what happens when they’re not cool.”

Dakota Fanning - Actor - This youngest-ever Screen Actors Award nominee recalls: “I learned to read at two. In a Montessori school they teach you to read really, really young.” For Montessori kids, reading skills emerge in the prepared environment and they work at their own pace in age diverse groups— not in curriculum-dictated lockstep.  For Fanning, autonomy led to early achievement throughout her life.

Friedensreich Hundertwasser - Austrian painter and architect attended a Montessori school in Vienna, which influenced both his affinity for vibrant colors and respect of nature. He collected pebbles and pressed flowers as a child, demonstrating an interest in items that are precious and small at an early age, which later manifested itself in his collections of Venetian glass and Japanese fabrics.

Peter Drucker - Management Guru is known as the father of modern management. A prolific writer, business consultant and lecturer, he introduced many management concepts that have been embraced by corporations around the world.

Yo Yo Ma - world famous cellist.  “Structure is an absolutely important part of the creative life, and Emily got this from her Montessori experience.” Yo Yo Ma said about his daughter.  Ma was, himself, a Montessori student.

Bertrand Russell - Famous British philosopher. “On sending my little boy of three to spend his mornings in a Montessori school, I found that he quickly became a more disciplined human being, and that he cheerfully acquiesced in the rules of the school. But he had no feeling whatever of external compulsion: the rules were like the rules of a game, and were obeyed as a means of enjoyment.”

Alexander Graham Bell - founded two of the first Montessori Schools in the U.S. and Canada

Thomas Edison - founded a Montessori school in the U.S.

Woodrow Wilson - created a Montessori classroom in the basement of the While House for his daughter, Alice, who was a Montessori teacher

Erik Erikson - was an influential and pioneering psychologist, psychoanalyst, and author whose theory of the eight psychosocial stages of development profoundly shaped the field of child development.

Alice Waters- chef, author, and former Montessori teacher. “Children learn best through experience. The senses are the pathways to our minds—and when a child’s senses are activated, knowledge floods in . . . They are doing math by osmosis, effortlessly absorbing their lessons. This is the beauty of a sensory education—which is, at its core, a Montessori education: the way all the doors into your mind are thrown wide open at once.” 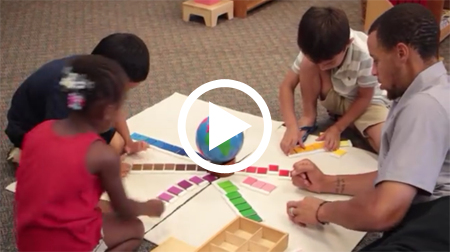 NBA superstar Stephen Curry, and his remarkable family, tell us how a Montessori education has helped shape their outlook on life in an exclusive interview, filmed at the Christian Montessori School at Lake Norman where Stephen's mother, Sonya Curry, is the head of school. 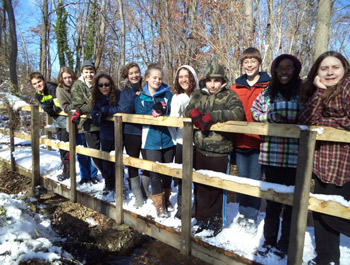